On September 5th, 2018 I boarded a plane and flew south to attend the 24th European Association of Archaeologists (EAA) Annual Meeting in Barcelona, Spain. Every year archeologists take over a different city in Europe for a few days, and this was my third year in a row where I attended (last year’s was in Maastricht, the Netherlands; the year before that was in Vilnius, Lithuania). Unlike previous years I went purely to attend lectures and network and did not present a paper. The latter felt positively decadent – it’s probably been a good 7 years since I attended a conference without having to stress about presenting a paper!

“The EAA Annual Meetings are the highlight of the EAA year, bringing together colleagues from all over Europe to discuss important issues in research, heritage management and commercial practice, ethics and theory, and the newest results of fieldwork. With over 2.000 delegates and 150+ sessions, the EAA Annual Meetings have grown to be an essential event on European archaeological scene. The omnipresent friendly atmosphere and lively social programme provide excellent opportunities for networking.”  www.e-a-a.org

In this blog, I want to share some of my experiences at this year’s Meeting and also offer some general tips for getting the most out of larger conferences. I remember finding these larger conferences incredibly overwhelming and a little intimidating when I first started attending them, so I wrote down some of the things that help me get through these large get-togethers and enable me to get the most out of them at the same time. I hope someone might find them useful!

The conference’s opening reception on Wednesday evening took place in a fantastic location – El Born Cultural and Memorial Centre. It is housed in a large cast-iron building known as the Old Born market, which opened 1876 and was used as such for almost a hundred years. Later, an archeological site was discovered underneath it, which can now be viewed inside the market hall. You can see the remains of houses and streets of Barcelona from the 1700s – which made it a very appropriate location for an archeology reception! Though the organization left something to be desired (no drinks for the first hour, not even water even though it was dangerously hot), the venue made up for it. And I had a great time catching up with colleagues and friends from abroad – some I hadn’t seen in years!

The next day marked the start of three days of parallel sessions – sometimes as many as 40 sessions were going on at the same time! The scientific program of the conference itself had plenty to offer me this year, with sessions focusing on the 8th century BC (the start of the Early Iron Age in most of Europe), interaction during the Iron Age, as well as ancient textiles and other precious materials. Particularly the latter I found quite inspiring, and started an idea forming for a research paper that I would like to write in the future!

I also spent a fair amount of time helping out at the Sidestone Press stand, where we were selling a selection of books, as well as providing information to prospective authors. I really enjoyed this, especially because several of our authors whom I had e-mailed within the course of my Sidestone work, but never actually met, stopped by! I also had quite an entertaining interaction on Social Media, when I posted a picture on Instagram, only to get a message from a follower “that I was standing in front of her book”! Turns out it was a book I did the layout of, and that we’ve e-mailed extensively – we just never made the connection with our online handles! This happened several times – and more than once I had people come up to me and go “You’re the Overdressed Archeologist!” – which I, of course, loved 😀

I was happily surprised to see the hallways of the conference venue positively plastered in flyers highlighting the disturbingly high frequency of sexism and harassment that takes place in archaeology. It is, unfortunately, a fact of life that archaeology (as well as academia) is generally still quite male-dominated and traditionally not always that female-friendly. I hope to be posting a blog on my own experiences in the not too distant future.

It later turned out that this campaign was not actually done by the EAA, but by the local student society (if I understood this correctly – a lot of the relevant tweets were in Spanish) – which I find incredibly brave and powerful. This is a problem that needs to be brought out into the open, and I very much hope the #stopviolenceinarchaeology will help start a much-needed dialogue as well as lead to real change.

Some general tips if you’re new to (large) conferences

Right – so here are a few general tips I’d like to give to those just starting out in their career and attending conferences. When I first started going to conferences and workshops, I remember finding them quite overwhelming and feeling unsure of myself about how I should behave. So in this blog, I offer up some of the things I wish someone had said to me all those years ago. Please bear in mind that there is no ‘right way’ to attend a conference, and the following are not offered as rules that you should follow, they’re more like guidelines (guess the pop-culture reference!) if, like me 10 years ago, you feel like you have no idea what you’re doing at conferences or don’t know how to behave. I hope you find them useful!

Whenever I attend workshops or conferences, I try and make a plan – why am I going, and what do I hope to achieve? For me, having an idea of what you would like to get out of the experience helps me justify spending my time and money attending. Sometimes my goal is relatively straightforward, for example, to try and get my research results as well as me as a researcher ‘out there’ (either by presenting a paper or engaging in discussions). Other times I have a more specific thing I wish to achieve – for example, connect with an expert to do an analysis I want doing, or gain access to a specific material or a specific dataset through a visiting scholar.

Having this kind of plan helps me get the most out of my time and money, and for me helps me from dithering or putting off introducing myself to someone, which I generally find a bit daunting (helloooooo social anxiety).

2) Asking questions – be bold but sensible

Everyone at the conference is interested in the material being discussed, so if you have a question following a lecture, be bold and ask it. But don’t ask questions ‘just because’, and be wary of being ‘that guy/girl’ who:

Also – don’t be scared of going up to a speaker or scholar to introduce yourself and ask a question. Generally speaking, everyone is there to network, and most people are happy to talk about their research or offer you advice on yours – as long as you ask politely. I always am.

If there are parallel sessions – think about which ones you want to attend, but don’t be ruled by Fear Of Missing Out. It’s not the end of the world to skip a session, even if it’s just because you need a break. I personally am physically incapable these days of really paying attention for 10 hours straight, so I often plan meetings during one block a day, or use it to stroll around the information/book markets.

And lastly – I would always recommend you dress the part. By which I definitely do not mean you should be ‘overdressed’ like I tend to be, but that you do at least spend some time thinking about how you look and will come across. Stay true to yourself (i.e. don’t wear a suit/dress if it makes you feel uncomfortable), but try to look at least a little professional and put together. Don’t wear the T-shirt with the holes in it or inappropriate comics on it, don’t wear your jeans sagging, and don’t wear things that are too revealing (whether you have boobs or chest hair, it’s just inappropriate to have them showing).

If you can and feel comfortable with it, wear something clean, neat and simple to make a good first impression. Especially if you’re a younger scholar trying to build a network, it furthermore helps to be memorable – both in speech and appearance (even though the latter really shouldn’t matter – experience has established that it really does). If you’re an archaeologist, consider, for example, wearing some #archeobling. I find that wearing an appropriately themed brooch/necklace/bracelet gives people an opening to start a conversation (“hey, I like your spearhead necklace, oh and I wanted to ask you…”), and something to stand out through and be remembered by. Plus – you’ll look so cool 😉

And on that note, I think I will wrap up this admittedly slightly random blog post. I hope at least some find these tips a little bit helpful, and by all means, send me a message if you have any questions or just need some advice! 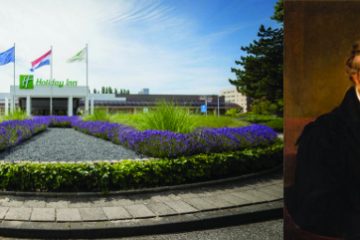