How I became an archeologist

Since I’ve been getting a lot of messages recently from people asking what it’s like to be an archeologist and how to become one, I decided it is high time I devote a blog to how I became one!

Ironically, I actually am not one of those people who dreamed of becoming an archeologist since childhood. As a kid, I certainly had an interest in it and loved watching documentaries, but I honestly didn’t have a clue when it came time to pick something to study. In the Netherlands, you have to pick your specialization when you start college (Liberal Arts Degrees are not really a thing here), so I had to make up my mind before I registered. Personally, I found it very difficult to decide what I wanted to do with my life at 18 years old.

During the last few years of high school, I oscillated a lot between different fields. I considered becoming a veterinarian, studying biology and even medicine. But always there was also this tug in my heart to go for archeology. I tried to ignore this desire initially because everyone told me that I should study something with better job prospects. For two years I kept changing my mind, always between something biological/medical and archeology. Given that archeology had been the only thing that I had consistently wanted to pursue, I was more and more leaning towards just going for it. Then Newgrange & Knowth happened and decided it for me.

If you’ve been following me for a while, you may remember my social media posts about these magnificent Neolithic passage tombs during the summer of 2019 when I returned there with the Husband and Kid. My first visit, however, was in 2006 during a family vacation to Ireland. I was not a particularly pleasant teenager, and initially was not all that excited about visiting something which I struggled to imagine. But I am so glad my parents dragged my grumpy teenage ass there!

Newgrange and Knowth are gigantic megalithic tombs, built over 5000 years ago in the Boyne valley in Ireland, and they are glorious. I was absolutely captivated by how people had built them, why they had done so, and why they had covered them in beautiful carvings. I was hooked.

Getting my Bachelor & Newgrange part 2

Having finally made up my mind, I headed to Leiden in the fall of 2006 to start my studies. Leiden is the only Faculty of Archaeology in the world and offered a broad range of specialisms, which is what attracted me to studying there. At the time I wasn’t sure what I wanted to specialize in. I always felt a connection with European Prehistory, but can’t deny that the prospect of excavating somewhere warm and sunny held its attractions. As such it was great that the first year of my degree involved classes in European Prehistory, classical archeology, the Middle East, South American and Asian archeology. It was all interesting, but Prehistory was really where I was finding my groove.

Then I literally won the lottery. While in class I started getting missed call after missed call from my mom and sister, and by the time I got out of the lecture hall to call them back I was sure my dad had been hit by a bus or something. Nope – turned out my sister had won the Newgrange lottery and was taking me as her plus one! What is the Newgrange lottery you ask? Well, the Neolithic creators of the monument built it in such a way that on the winter solstice the rising sun travels along the central passage to light up the chamber within. A spectacular event that few people get to see because the only way to get in is to enter the lottery and win one of the coveted spots. So, there I was, a first-year archeology student who won the prehistoric lottery. I remember I had to ask my Prehistory professor if I could re-take my exams a week later because they overlapped with the solstice, and I swear I have never seen him so excited and pissed off at the same time! He had been trying to get in for years, and while happy for me, couldn’t deny being more than a little jealous. Luckily, he never held it against me and went on to become one of my PhD supervisors. 😉

I spent the summers of my BA excavating – mostly in the Netherlands but also in Germany and Orkney – and of course, met the Husband on one of these digs in the summer of my second year.

I completed my BA with a thesis on Neolithic Bell Beaker stone wrist-guards, for which I did both use-wear analysis on actual artifacts as well as archery experiments (I was an avid archer at the time). And even got a small research grant to conduct more experiments in the Land of Legends park in Lejre, Denmark. I also did a small internship at the Museum of Antiquities organizing material from an older excavation, which is how I discovered both my love for museum work and met Luc Amkreutz – who would go on to become one of my best friends a few years later.

How I got into Iron Age elite burials

Following my BA, I applied and was accepted to a 2-year Research Master program, during which I discovered my love for the Early Iron Age. This was quite a surprise, as during my BA and the start of my Research Master I was very much a Stone Age girl. I was completely fascinated with everything Neolithic. I even started working on an MA-thesis on Neolithic stone ‘battle-axes’. But then I followed a research seminar on the Early Iron Age Hallstatt Culture.

At the time I was also doing an internship at the Museum of Antiquities, working as Luc Amkreutz’s assistant helping to prepare and design the new exhibition on the Archaeology of the Netherlands. As part of this internship, I helped prepare the artifacts from the Chieftain’s burial of Oss for display. And since I had access to this complex, one of my professors asked me to create an updated description of it for my research seminar. This new inventory was badly needed as this grave has been through three rounds of restoration since its discovery in the 1930s, and as a result the objects that could be recognized also changed. I started studying the artifacts and was struck by how what I was seeing did not match up with what I was taught in my seminar. For example, at the time the bronze bucket was ‘widely known’ to be rather decrepit and covered in ancient repairs. However, I couldn’t find any signs of this! And as I continued, I was finding more and more inconsistencies, so I started looking into other, similar burials. Again, I was hooked.

I ended up stopping my MA thesis into the Neolithic Stone Age ‘battle-axes’, and dove head-first into the Hallstatt Culture. For my Research Master thesis, I ended up studying four elite burials from the Low Countries and turned up such interesting results that I was able to obtain a ‘PhD’s in the Humanities’ grant from the Dutch Science Organization to continue to research all Early Iron Age elite burials in the Low Countries.

During my PhD I traveled to museums and depots all over the Netherlands and Belgium to study objects and ended up writing two books on my research. To be able to place ‘my’ elite burials in a wider context, I worked in Munich for a while to learn more about the Central European connections reflected in them. While there I met Robert Schumann, who not only became a good friend, he has also been my ‘portal’ to Hallstatt Culture research in Central Europe.

As everyone knows, a big part of doing your PhD is networking, and I attended conferences and organized a workshop on Early Iron Age elites with Robert. Ultimately, I finished my PhD project (on time!) in 2017, and both Luc and Robert stood up with me during my defense! My double-volume thesis went on to win me the Joseph Déchelette European Archaeology Prize, as well as placing second for a national prize.

And that is the story of how I became an archeologist! 🙂

Want to become an archeologist? Make sure you have a backup skill/side hustle

Having told the story of how I became an archeologist, I would now like to share the advice I give everyone who asks me for tips on becoming one. While things have worked out for me and I am extremely happy with the life I lead and the work I get to do, I hope it is clear that being an archeologist is not an easy life. Remember also that I am one of the lucky ones who actually found work in archeology. While I certainly don’t want to warn anyone off from pursuing their dreams, I do try to be honest about the challenges inherent to pursuing work in this field.

Depending on where you live and want to work you will need different qualifications and degrees, and I would recommend you go online to find that information. But I would also want to recommend that you try and develop/cultivate a backup skill or side hustle. For example, by developing my writing, editing and translation skills, I am currently able to finance my ongoing research projects. So, while I always encourage those who reach out to me with questions on how to become an archeologist to pursue their dreams, I also try and stress that it is not an easy life. But when it works out, it is pretty freaking amazing.

Thanks for the interesting story!

Coloring the Iron Age: Oldest dress in the Netherlands was bright red and blue

Coloring the Iron Age: Oldest dress in the Netherlands was bright red and blue Several years ago, during my PhD, I analyzed a number of textile finds from an Early Iron Age elite burial. Now Read more…

#Metoo – a woman in academia & archeology

While I usually blog about the joys of being an archeologist, I want to shine a light on something far less pleasant – namely the sexism and harassment in academia and archeology with frequently inadequate Read more… 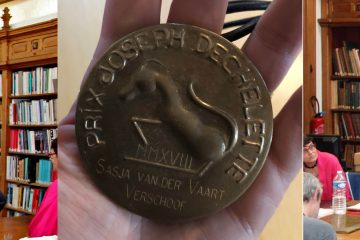 I am honored and proud to say that on Friday 15-06-2018 I was awarded the Joseph Déchelette European Archeology Prize for my dissertation Fragmenting the Chieftain. This relatively new prize, named after internationally renowned scholar Joseph Read more…